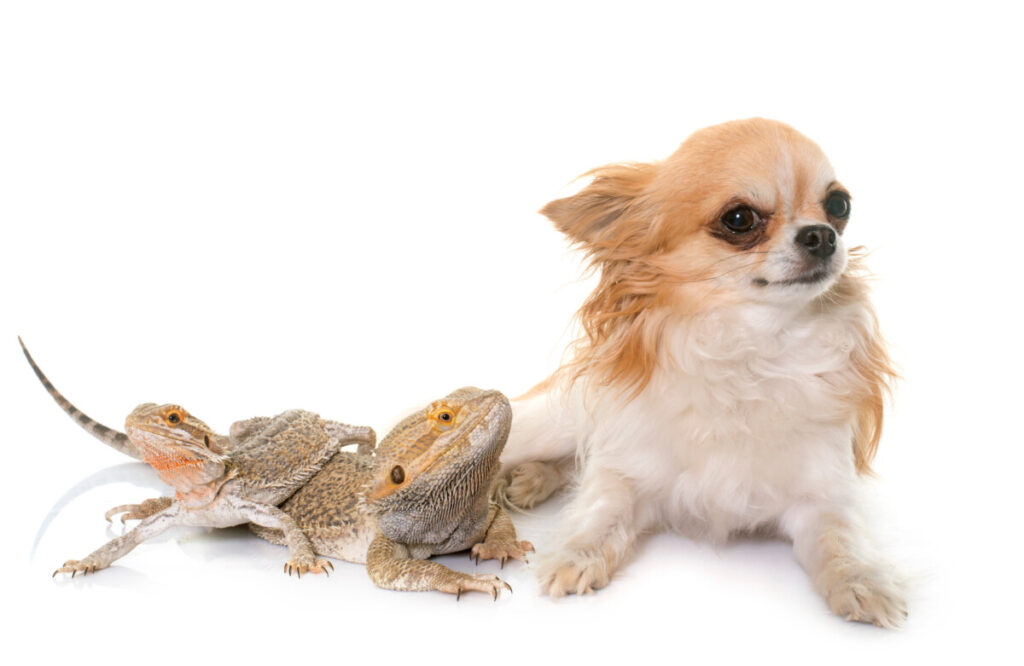 Many people own bearded dragons and absolutely love them. However, they are not conventional pets, and many bearded dragon owners also own cats, dogs, and other animals. Naturally, one of the first questions those people have is whether or not their bearded dragon will get along with their other pets.

It’s definitely fun, as a pet owner, if all of your pets get along, like each other, and even play together. But it can also be dangerous. Cats are cold-blooded predators. Dogs range from sweet to downright aggressive. And who knows what’s going on inside the head of a bird, snake, or hamster!

Do Bearded Dragons Get Along With Other Pets?

Yes, bearded dragons can get along with cats and dogs if they are introduced properly. It’s not a good idea for beardies to interact with other types of pets like reptiles, birds, or small mammals. Interactions should always be closely supervised and limited to very short amounts of time.

All of your pets can get along if they are introduced to each other properly and their personalities work well together. But also keep in mind that there are a lot of variables. Things could go well or they might not.

For every cute picture you see online of a beardie and a cat or dog playing together, there are hundreds of homes where this type of interaction would be a terrible idea. That’s why we think there is another, much more important question to be asked.

Should Bearded Dragons Interact With Other Pets?

Let’s be brutally honest here. The only reason you want your beardie to play with your other pets is for you, not for them. Your bearded dragon does not need a friend or a playmate. They do not get lonely. They do not need or want company.

The truth of the matter is that we, as people, get a lot of enjoyment from watching our pets play and interact. It’s one of the biggest reasons we take our dog, Anny, to the dog park every day. It’s so much fun to watch her romp and play and be the social animal that she is.

But that’s the difference. Dogs and cats are social animals. Bearded dragons are not.

We not only own Bacardi, our bearded dragon, but we also own a cat and a dog. Scooter is a 12-year-old indoor cat and Anny is a 6-month-old Australian cattle dog. We love them both. And neither one of them has ever been allowed to directly interact with Bacardi! And they never will be.

Would it be cool if we could let them all out and be sure that they would get along? Sure! It would be cool for us, but they could care less!!!

So, before you go any further, please ask yourself a very important question. Why do you want your beardie to interact with your other pets in the first place? Is it making any of their lives better in any way? How would you feel if one of your pets was seriously injured or killed?

With that said, we know there are still a lot of people who are interested in having their beardie get along with their other pets. So let’s dig in a little further. If you are going to do this anyway, we want to make sure you have all of the tools you need to do it safely!

What Animals do Bearded Dragons Get Along With?

The calmer and more mellow of a pet you are trying to introduce to your bearded dragon, the better off you’ll be. Dogs and cats with calm, even temperaments are the only other pets we would try to work with here. And really, only dogs.

Sorry to all you cat people out there, but even if your cat is sweet, calm, and even-tempered, we aren’t huge fans of introducing cats to bearded dragons. Cats are predators. Their natural instincts are to kill and eat other small animals.

Domestic cats kill and eat one to four billion birds, six to twenty-two billion small mammals, and hundreds of millions of reptiles and amphibians every year. (Source) That’s right, whether you want to believe it or not, your precious little Socks is a vicious killer.

And to Socks, your beardie does not look like a beloved pet. Your cat sees a tasty meal or simply prey to be toyed with. In fact, many cat owners mistake cats playing with their prey as simply playing. This can be a deadly misinterpretation. (Source)

While dogs aren’t the predators that cats are, they can still be dangerous to other animals. The danger here comes more from a dog who gets overexcited and inadvertently injures your beardie. This can be curbed with close supervision.

Of all of the other pets out there, you probably have the best chance of a good interaction between a dog and a beardie. Just make sure you are very careful and are comfortable reading your dog’s body language.

Dogs, unlike cats, give off many warnings before attacking or trying to harm something. If your dog shows any signs of agitation, separate them from your beardie immediately!

Bearded Dragons and Other Pets

If you have lizards other than your bearded dragon, keep them apart and never put them in the same enclosure.

How to Introduce Your Bearded Dragon to Other Pets

If you want your bearded dragon to get along with your cat or dog, you need to introduce them slowly. To do so, do the following.

Never let your cat or dog be alone unsupervised with your bearded dragon, even if they are aware of and seem to like each other. You never know what will happen when you leave your pets unsupervised together, so it is best not to do so.

When to Keep Bearded Dragons Away from Other Pets

Sometimes, when you are introducing your bearded dragon to your other pets, you need to remove it from the situation. There are a few signs that they will show that mean you should remove them from the room as soon as possible.

When your bearded dragon’s beard becomes black, put them back in their enclosure. When a beardie’s beard is black, they are extremely stressed.

If your cat shows these signs, it might be a good idea to keep them out of the bearded dragon’s room all together. Your cat will find a way to get into the enclosure when you aren’t around and once that happens, your beardie doesn’t stand a chance.

Better than that, please realize that like we mentioned at the beginning of this article, there is no benefit to your beardie of introducing them to other pets. There is nothing but downside for the most part.

What’s the safest way to have your pets get along with your bearded dragon? Not doing it in the first place!

Aren’t you being overly cautious? My cat is a sweetheart and wouldn’t hurt a fly!

Are you willing to bet your beardie’s life on that? Because that’s exactly what you are doing if you let your beardie and your cat interact. All it takes is a split second of instinct and your normally calm cat is not the sweetheart you think they are!

This is not a good idea. Beardies are solitary creatures and should live alone. The only time bearded dragons should be kept together or introduced to each other is if you are breeding them. Otherwise, it’s always best to keep bearded dragons separate from each other.

Can a bearded dragon injure other pets?

Yes, they can! Bearded dragons have lots of very sharp teeth and once they bite, often don’t let go. Their claws are usually sharp too and can easily damage another pet’s eyes.