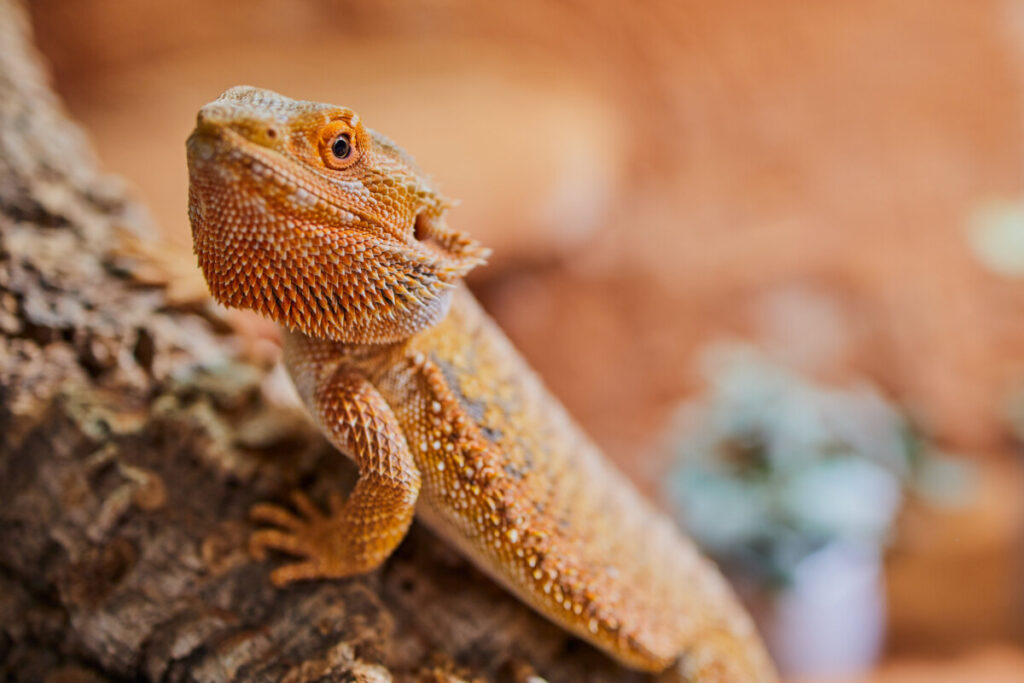 When we rescued Bacardi, our bearded dragon, we were told that she was a female. From that point, we always referred to her as “our sweet little beardie girl”. Two different vets never disagreed with this, either. So, we never bothered to ask, “Is our bearded dragon male or female?”. We didn’t think we needed to!

Well, imagine our surprise when we were told by our new vet that Bacardi is not female. One quick look and they told us that Bacardi is, in fact, a boy!!! When we clearly didn’t believe them, they showed us exactly how to check. And they were right, Bacardi is a male bearded dragon, not a female!

So how did a biology professor (we rescued Bacardi from an environmental biology lab at a local community college) and two different vets get it wrong? And if they got it wrong, how is the average bearded dragon owner supposed to know?

Is your bearded dragon male or female?

To check if your Bearded Dragon is male or female, lift its tail and check directly below the vent. Two clear bulges indicate a male. One bulge may indicate a female. A vet can tell you for sure, but females are harder to sex than males. The older the beardie, the easier it is to determine the sex.

There are a few more details you may need, but that’s the easiest way to check. Read on for an alternate method as well as what to do if the methods we list here don’t work.

Method One: Look Under the Tail

The first method, as described above, is a fairly straightforward one. It will work most of the time with a few exceptions. There are a couple of tricks to make things easier for you too.

When determining the gender, make sure your bearded dragon isn’t stressed and is used to being handled. If you aren’t sure how to safely pick up your beardie, check out our step-by-step guide here. If you are worried about being bitten, don’t be! We cover beardie bites in detail here, but if you handle them correctly, this will not be an issue for you.

To determine your bearded dragon’s sex, gently lift them onto your palm, facing away from you. Make the situation as stress-free as possible. If they show signs of stress (trying to get away aggressively, a black beard, puffing up, etc), put them back in their home and try again later.

Once they are safely in your hand facing away from you, gently lift the bearded dragon’s tail a little under ninety degrees so you can see the underside of the tail closest to the vent (where they poop from).

The reason you want to lift the tail to check is that this position will make the bulges you are looking for pop out a bit more and they are a lot easier to see this way. Not lifting the tail usually results in seeing no bulges at all.

If your bearded dragon is a male, you will see two distinct bulges. These bulges, called “hemipenal bulges”, will be located immediately below the vent (see images below). There will be noticeable grooves on or around the bumps. For a female, there will only be one bulge on the center of the underside of the tail. (Source)

If you see two bulges, you can be fairly certain you have a male. Females are a little trickier. Just like our little Bacardi was mistaken for a female, you can do the same thing if going by the single bulge alone.

It can be difficult to determine what the gender is of a bearded dragon until after a certain point in its life. Eight to twelve weeks is typically when accurate distinctions can be made. If you aren’t sure how old your beardie is, then go by size and wait to check until they are 7″-8″ long from nose to tail.

Here we see the hemipenal bulges of a male bearded dragon. Notice how lifting the tail to roughly 90 degrees makes them more visible.

The above two images were sourced on BeardedDragon.org. Make sure and bookmark their site as it’s one of the most complete and helpful bearded dragon resources out there!

Method Two: Use a Flashlight

If the look under the tail method isn’t working for you, there is a second way to find the Hemipenal Bulges that tell you what sex the bearded dragon is.

Turn off most or all of the lights in the room so the contrast is sharp enough for you to see what is going on. Have a flashlight ready. The one on your smartphone will work just fine! It’s also helpful to have a second person to help. One to hold your beardie and one to shine the light.

I found this image on Pinterest showing what sexing your beardie with a flashlight will look like. This can be a much clearer way to determine the sex of your bearded dragon than simply looking under the tail.

Shine the flashlight on the topside of the tail, directly over the location that the hemipenal bulges should show. Then, gently lift the tail. The silhouette of the bearded dragon’s bulges will show through and everywhere else the light will shine through. Two bulges and it’s a male, one and that’s a female bearded dragon.

If you’re having trouble finding the bulges with the flashlight, change the position of the flashlight closer to the base of the tail, as there likely isn’t enough light for you to see the bulges clearly. All bearded dragons will have this if they’re old enough for you to determine what their gender is. (Source)

Checking With Your Veterinarian

The biggest challenges we’ve faced as bearded dragon owners are the health issues our rescue beardie came with. Not only is dealing with his failing health hard but finding a great exotics vet was equally as hard.

The first two vets we took Bacardi to were not exotics or herp vets. They were nearby veterinarians who stated that they could take care of bearded dragons. And at first glance, it seemed like they could. Then we went to Chicago Exotics.

It was immediately clear that the previous two vets were NOT qualified to care for bearded dragons. The folks at Chicago Exotics have been amazing and we can’t recommend them enough. We cover vet care in depth in this article, but the short version is to find one that specializes in reptiles!

All that said, if the two methods listed above don’t work for you, just ask your vet the next time you are there. If they are a qualified exotics vet, they can tell you pretty easily!

How old does a bearded dragon need to be to tell its sex?

The sex of a bearded dragon becomes apparent at 8-12 weeks old. This assumes that the bearded dragon has also reached a length of at least 7″-8″ from nose to tail.

Do bearded dragons require different care based on their sex?

Unless you are breeding them, no. Males and females require the same lighting, food, and care. While males may grow to be bigger than females, the level of care is not different from one to the other.

Do male and female bearded dragons have different temperaments?

The one exception to this is when breeding them. When breeding bearded dragons, males and females behave very differently from one another. The males tend to get very active and aggressive as they compete for a mate. The females tend to be much more passive during this process.