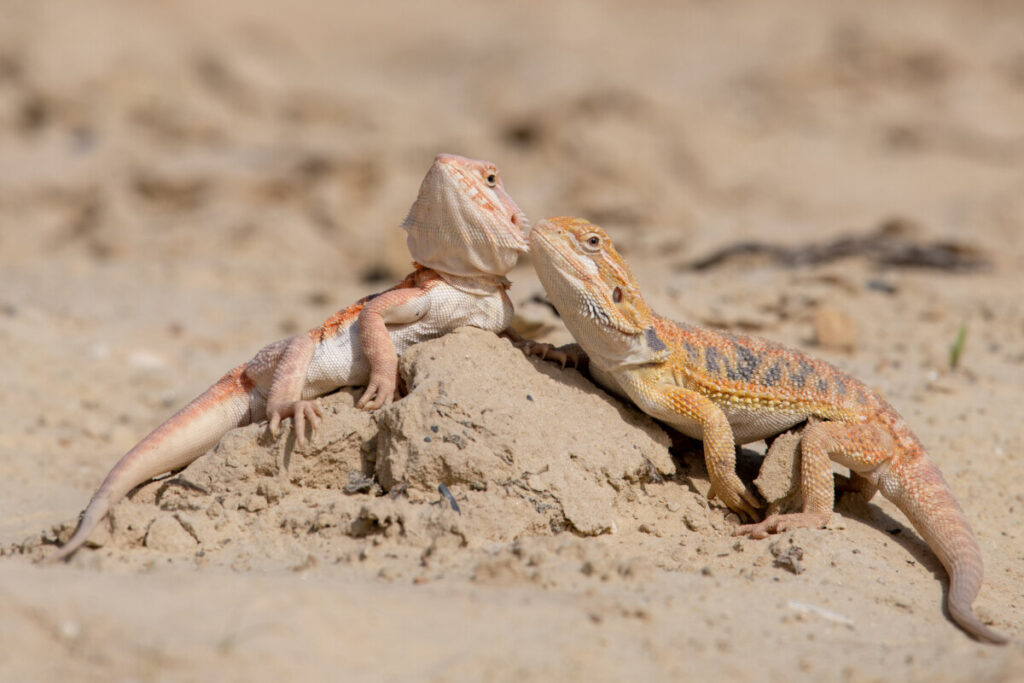 People tend to assume that their pets feel the same emotions that they do. It’s easy to think that because a certain situation makes us feel a certain way, it makes our pets feel the same. This is the main reason that beardie owners often ask if bearded dragons get lonely.

After all, if we were left in a glass enclosure by ourselves all day, we would get very lonely! In fact, over the last couple of years of lockdowns and quarantines, a lot of us can relate to being cooped up by ourselves with no social interaction. For us, it’s no fun at all!

This leads many beardie owners to try to find friends for their bearded dragons. Whether that’s introducing them to other household pets, or adding a second beardie to the enclosure, there are a lot of bad solutions to something that’s not really a problem in the first place!

Do Bearded Dragons Get Lonely?

Bearded dragons kept in captivity do not get lonely. They are solitary creatures in the wild and should be kept that way as pets. While bearded dragons can grow close to their owners, they do not miss them if they are not around. Unless they are breeding, bearded dragons prefer a solitary life.

As we regularly mention here on Beardie Bungalow, our goal as bearded dragon owners is to emulate their natural habitat and lifestyle as closely as possible. Our little scaly friends have evolved over millions of years to thrive in very particular living conditions.

In the wild, unless they are mating, the only time you’ll see beardies hanging out around one another is if they are fighting. Otherwise, you won’t ever see bearded dragons being social with each other or playing. This is a great indicator of how we should keep them in captivity!

As humans, we tend to over-sympathize creatures and add a humanistic personality and characteristics to them (known as anthropomorphism). This gives us the false perception that animals experience the same feelings as we do. This is incorrect and leads to false or even dangerous beliefs about the care of animals.

Anthropomorphism can be a dangerous way of thinking—it interrupts the accurate perception of the natural world and its ways. When we start to associate humanistic feelings, such as loneliness or embarrassment, with animals or objects, we start treating them in ways that are unnatural and sometimes harmful to them.

Our knowledge or assumptions about bearded dragons are sometimes wrong. We are associating the solo habitat of a bearded dragon with misfortune, loneliness, or sadness. This leads to attempts to fix that supposed loneliness because no one wants their pet to suffer, right?

Although you have good intentions, these thoughts can lead to actions that make your bearded dragon unhappy and uncomfortable.

Now that we have established that bearded dragons do not get lonely, we can delve deeper into the psychology behind why they don’t comprehend this emotion as humans do.

Why Bearded Dragons Prefer to Be Alone

In the wild, a beardie’s lifestyle is a composition of natural selection and survival of the fittest. It won’t do a bearded dragon much good if it has to split half of its food and shelter with another bearded dragon. Therefore, these lizards prefer to live alone unless they are ready to breed.

Over the course of thousands of years, humans have domesticated many animals. These animals were bred to live in close association and proximity to humans. Animals like cats and dogs have evolved and been domesticated in a way that reptiles have not.

Reptiles kept as pets have not been around long enough to be tamed to live symbiotically with humans in the same manner that cats, dogs, and some rodents do. It’s highly questionable as to whether this would even be possible!

A reptile’s survival instincts can cause them to be wary of you and to even feel threatened at times. Don’t take this behavior personally, since it’s only their natural instinct. You can help your lizard to become more familiar with you, but don’t expect your bearded dragon to cuddle up and ask for pets in the same way a cat or dog would.

Spending Time with Your Bearded Dragon

Some bearded dragon owners even enjoy taking their pets outside or walking them with a harness and leash. We’ve done this with Bacardi several times but don’t anymore. She clearly did not like it. But yours might!

Don’t mistake your beardie liking you and enjoying being held with them needing to be held. Make no mistake, they do not need you in any way and don’t miss you when you are gone!

Should Multiple Bearded Dragons Live Together?

But wait, haven’t we all seen tanks full of little beardies at the pet store? And don’t they all look like they are having a grand ol’ time piling on top of one another?

There are two situations where it is “okay” to have more than one bearded dragon in an enclosure.

For young beardies, their biology is solely focused on growing. Baby bearded dragons can grow at an alarming rate. They are only concerned with eating, sleeping, and pooping at this stage in their lives. Because many pet stores sell baby bearded dragons, it’s common to see them all in one enclosure.

Once a bearded dragon becomes a juvenile, it’s best to give them their own home. It’s at this stage of life where they become territorial as well as interested in a mate.

Obviously, it would be impossible for a bearded dragon to mate with itself. That means that when breeding, it’s inevitable that at least two bearded dragons will temporarily share the same enclosure.

Breeding should only be done by experienced reptile experts. Doing this incorrectly can lead to injury and even death. It’s best to leave this to the professionals!

Some people keep more than one beardie in the same tank because they don’t have room for more than one. In that case, it’s best to find another home for the additional bearded dragons.

When we adopted Bacardi, this was his situation. He was a rescue kept at a local community college. The college simply didn’t have the facilities to give each surrendered bearded dragon its own home.

So, for almost a year, Bacardi had to fight for any food she could. She was kept with a much larger beardie who bullied her, bit her, and generally gave her very little access to food. We are now dealing with a myriad of health issues that were caused by this.

Take it from us, please do not keep more than one bearded dragon in the same tank!

Do bearded dragons need much attention?

Bearded dragons do not need attention at all. Some may enjoy it, but it is not needed. This is one of the things that makes them perfect pets for many people. They simply don’t need much care or attention.

Do bearded dragons grow attached to their owners?

No, bearded dragons do not grow attached to their owners. They do have the ability to recognize their owners, though.

When a bearded dragon recognizes the person who regularly gives it food, they tend to act affectionate. Whether or not this is real affection or simply food drive is anyone’s guess.

In the end, though, they do not miss you when you are gone. This is true even if you are gone for a few days!

Can bearded dragons play with other pets?

The short answer is that they can, but probably shouldn’t. Remember, bearded dragons do not get lonely. They don’t need company or a friend. They are not you and they do not have your feelings and needs.