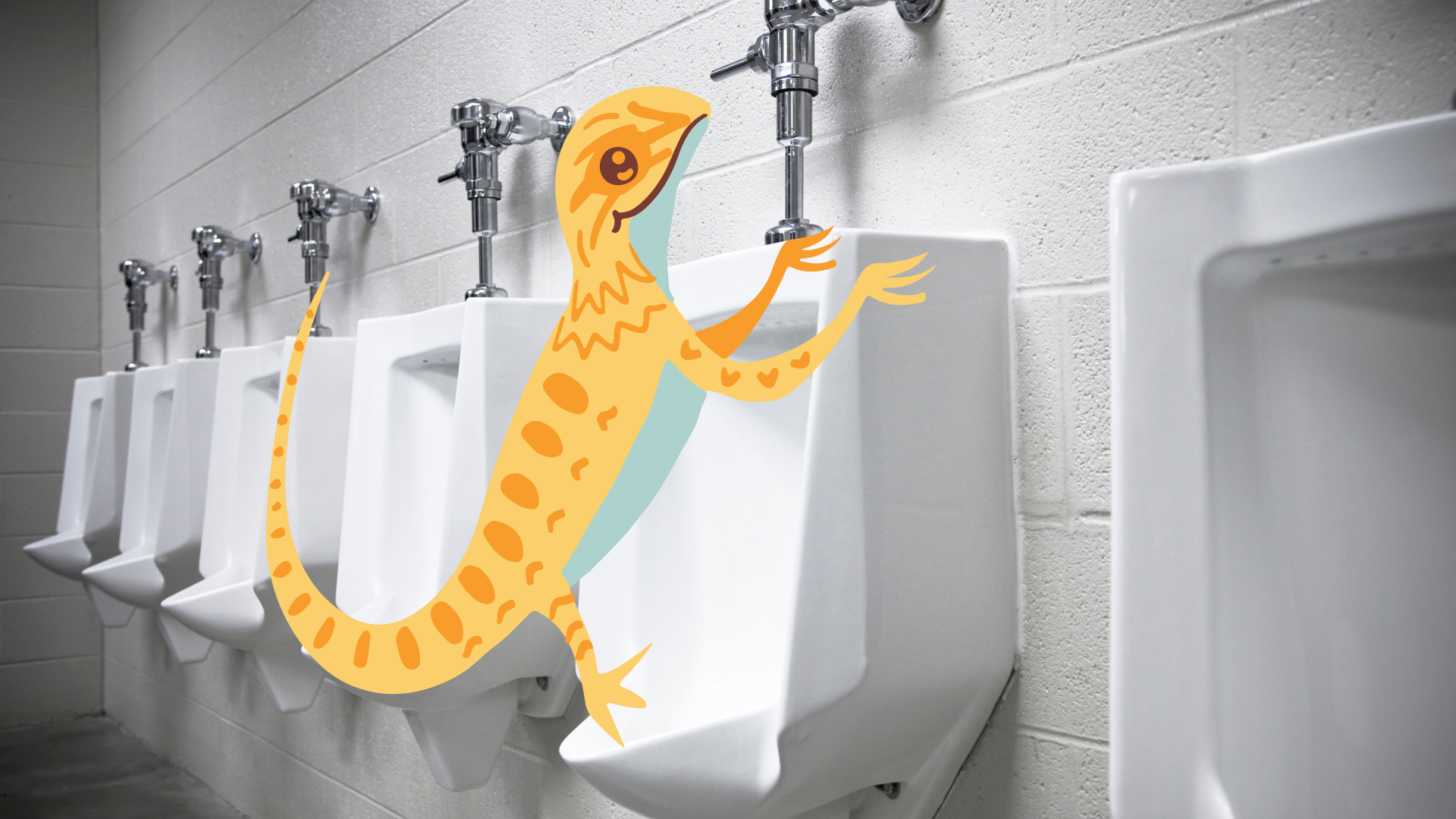 As a new bearded dragon owner, you may have been surprised at how much attention you have to pay to their poop. When, how often, and what color are just a few of the many things beardie owners should pay attention to.

If you think about it, you’ve never seen your bearded dragon lift its leg to mark something in its enclosure. You’ve never seen them squat down to relieve themselves after drinking too much. Because of that, it’s normal to ask if your beardie even pees in the first place!

Bearded dragons don’t excrete liquid urine. Instead, their kidneys filter out waste products and eliminate them in a solid white block (urate) that is expelled at the end of their bowel movements. This allows them to survive their native arid climate by retaining as much water as possible.

Bearded dragons come from the arid desert regions of Australia. This harsh, hot, and dry area of the world doesn’t offer its residents a lot of chances to drink the water they need to survive. That means that bearded dragons need to make the most out of the available water.

Whether the bearded dragon is in the wild or kept in captivity, its biology is optimized to preserve and retain as much moisture as possible. That means that urinating in the same way that humans or other pets do would be a threat to their survival.

Yes! One of the functions of our kidneys is to filter and excrete excess water. Your beardie has kidneys that do the exact same thing! But urine isn’t made up of water alone. It also contains waste products filtered out by our kidneys and liver.

In humans and other mammals, the waste products and excess water are sent to the bladder and eliminated by urinating. Since bearded dragons do not need or want to rid themselves of excess liquid, that leaves only the waste products to excrete.

That waste product is called urate, and you can see exactly what it looks like if you look at the end of your beardie’s poop. It’s that weird-looking white blob next to their bowel movement.

What Is That White Stuff In Your Bearded Dragon’s Poop?

The powdery white block that comes out attached to the end of your bearded dragon’s poop is urate. Urate is the primary way uric acid is removed from the body, and it consists primarily of waste products derived from the digestion of food. The white blob of urate should be soft and have no smell.

I remember the first few times that our bearded dragon, Bacardi, pooped. Each time there was a sizable white chunk at the end of it. At first, I thought it might have been something she ate.

That third time, I called the vet. I was relieved when they told me that was how bearded dragons urinate and that it was normal. Reptiles can be so different from any other pet that things like this can be disconcerting at first.

Luckily, our vet was used to me calling with basic questions and, as always, was helpful and patient!

What To Look For In Your Bearded Dragon’s Urate

For the most part, reptiles cannot tell you if they feel poorly. They are resilient animals and often show no signs of illness until they are highly uncomfortable.

For that reason, keeping an eye on their poop is important. The same goes for that white block of urate at the end of their poop.

The urate blob should be soft and free of blood. There will be some moisture, but it shouldn’t be overly wet. It should be free of odor, but we’re going to guess that no one will be separating it from the very smelly poop next to it to find out.

The most important thing to look for is changes in consistency or color. You will get to know your bearded dragon’s evacuations fairly well over time. The real red flags happen when something is off from normal.

What If There Is No Urate?

So what do you do if your beardie is pooping, but there’s never a white block of urate? If this happens regularly, the odds are that your bearded dragon is dehydrated.

It’s essential to make sure you are feeding them well-hydrated greens regularly. It’s also important to ensure that whatever insect feeders you use are gut loaded with fresh greens.

It’s also critical that you ignore those out there telling you that you shouldn’t leave a water bowl in the enclosure. We wrote a complete guide to beardie hydration that you can read here!

So there you have it. Beardies do excrete waste from their kidneys and liver. They just don’t do it in a liquid form as we do.

Bearded dragons are unique and unusual pets. Many things about them are different than cats and dogs. Learning those differences and enabling your beardie to thrive is both fun and challenging.

Can my beardie pee on me?

If you let them poop on you, the white block of urate (their version of pee) will also come out on you. As you get to know your bearded dragon, you’ll soon recognize when they have to poop and can put them back in their enclosure if this happens.

Do they pee when nervous?

Some bearded dragons have been known to evacuate both pee and poop when nervous or scared. Typically, they’ll puff up and/or turn their beard black first if this is the case.

As with all instances of a stressed bearded dragon, it’s best to put them in their enclosure and leave them alone until they are once again calm.

How often do they pee?

The frequency that a bearded dragon excretes urate is tied directly to how often it poops. Since both substances are eliminated simultaneously, the rate at which bearded dragons both pee and poop is the same.

Young beardies eliminate bodily waste as often as once a day. Older beardies may only do it once a week.

You’ll find that your bearded dragon has its own unique “schedule.” As long as they stay relatively true to that schedule, that’s a good sign. If they do not and start to go much more often, you may want to call your vet. If they haven’t gone in their regular time period, check out our article on what to do if your beardie isn’t pooping here.

Does their urate contain salmonella?

Lizards of all types can, and often do, carry salmonella. As long as you wash your hands before and after handling them, this should never be an issue. The bulk of any salmonella that is found in bearded dragons is found in their excrement.

Since the urate comes out along with their poop, it should not be handled with bare hands (we know… duh!). When removing their feces or urate from their enclosure, thoroughly wash your hands when done!